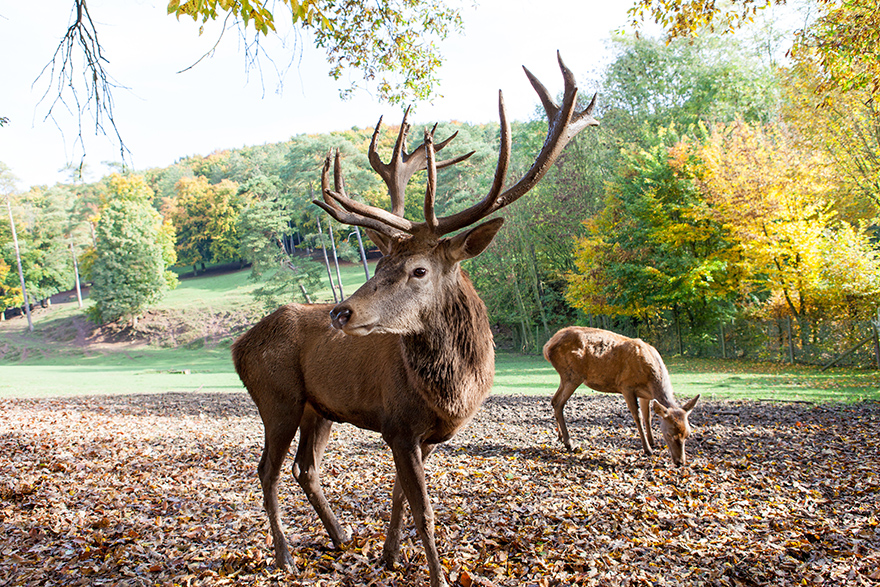 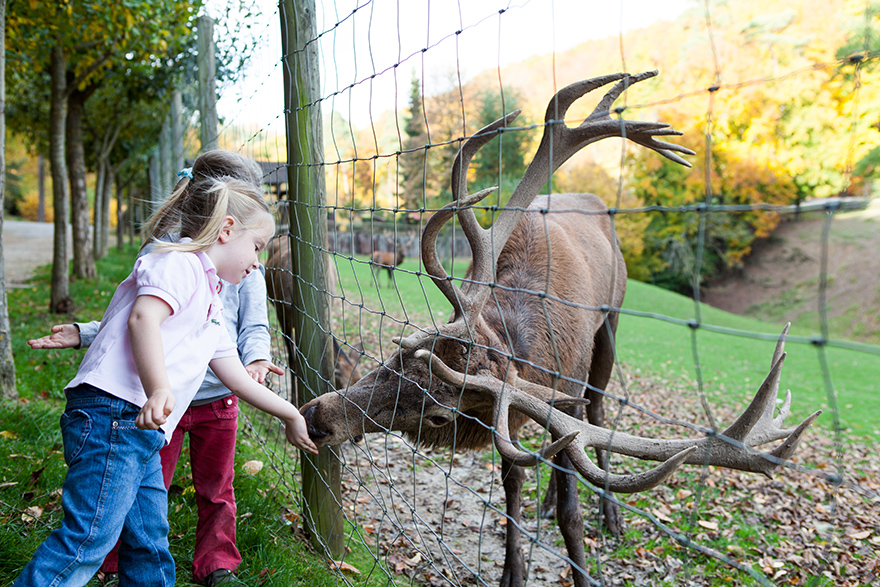 The Eifelpark is currently home to three different species of deer – sika, fallow and red deer. The most powerful are the red deer, “the kings of the forest”. They live in our animal park near Bitburg in an approximately 11-hectare deer park, which is located in front of the birds of prey. Red deer belong to the deer family and are so-called frontal armour-bearers; this dangerous-sounding name refers to the most typical feature of these harmless mammals, the males’ enormous antlers with which they intimidate their rivals during the mating season and defend their territory. Ranking is fought over playfully in the summer.
In the autumn, the rutting season, the fight to be the lead animal takes place. The females, too, have their own hierarchy. Here, usually the oldest and most experienced hind has the leadership. The young animals in the enclosure are not seen for the first three weeks and thereafter live in a sort of “Kindergarten” which is watched over by a young animal from the previous year. Many of these animals can be discovered during a day trip to the beautiful animal park in the Eifel.

Appearance
The name for red deer was derived from the strongly coloured reddish-brown colour of the animals’ coat in the summer. In winter, however, they are grey-brown. On the rump, but under the tail, they have a large white or yellowish spot, the so-called mirror. Red deer are our largest mammals; measuring between 1.6 to 2.5 metres from head to bottom, they have a back height of one to 1.5 metres, the little tail is 12-15 cm long and they weigh between 90 to 350 kg. The antlers of the red deer grow steadily and, from them, it is possible to judge the age of the animal. The young male animals have only one bar as antlers and are harts. Every year in March/April, the red deer loses all its antlers, these then grow back with additional branches. The antlers of an older animal can have up to 24 ends.

Habitat
Red deer need large, extensive forests with clearings in order to feel comfortable, but they can also be found in mountain forests and in heath and moorland areas.