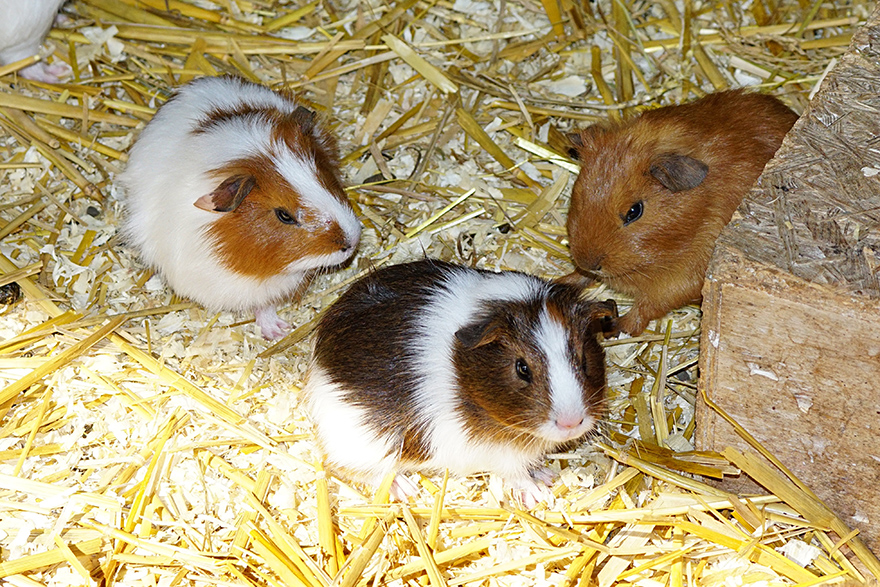 The guinea pigs in the Eifelpark live together with the rabbits in an enclosure in the Purzelgasse. The guinea pig bears its name because it makes sounds like a young pig and was brought from South America across the sea to Europe.

Appearance
Guinea pigs have a body length of 20 to 35 cm; males weigh between 1000 and 1400 grammes, females weigh between 700 and 1100 grammes. The ears and legs are short, the tail is receded. Guinea pigs have four fingers and three toes. In wild guinea pigs, the coat is smooth, dense and close-lying and of a grey-brown colour. In domestic guinea pigs, the coat is smooth, whirly and long-haired – these are also known as rosette and Angora guinea pigs. There are many variations aside from these three coat types.

Habitat
Guinea pigs originate from South America, where wild guinea pigs can still be found. The Indians kept guinea pigs as pets. The habitat of the wild species is an area with all-season grass growth and they colonise the lower-lying plains of the Pampas in South America up to the steep slopes of the Andes, where they can be found at altitudes of up to 4,200 metres. They live in burrows in groups of five to ten animals and either dig the burrows themselves or take them over from other animals.

Nutrition
The most important staple food is good hay – guinea pigs can never get enough of it. To wear down their front teeth, which grow throughout their lifespan, guinea pigs need to nibble a lot: branches from unsprayed trees and shrubs are ideal for this.