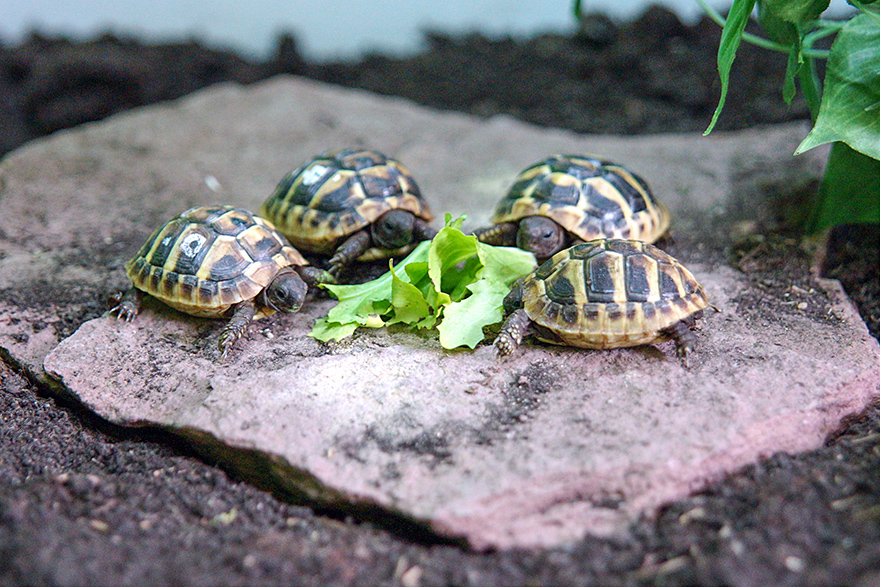 Habitat
The Hermann’s tortoise/Greek tortoise is one of three species native to the European part of the Mediterranean area. The tortoises are predominantly diurnal reptiles which can reach an old age comparable to that of man. The destruction of their traditional habitats and their popularity as pets are now endangering the wild animal population.

Appearance
The Hermann’s tortoise/Greek tortoise has a large geographic range, it can be found in Greece, Bulgaria, Romania, Serbia and Albania. The females, with a size of up to 25 cm, are considerably larger than the males. The shell is slightly domed and may vary greatly in colour from olive to brownish. The plastron is brownish-yellow with black spots. Form and intensity can vary greatly here. The arm plates are larger than those for the thigh and the tail has a horn nail at the tip. The Hermann’s tortoise/Greek tortoise usually does not have a yellow cheek patch but, if so, it is only slightly yellowish.

Nutrition
In nature, tortoises are exclusively vegetarian and only eat wild herbs. In nature, the food supply changes with the seasons: in the spring, there are young and succulent shoots whilst, in summer, only very fibrous plants are available.