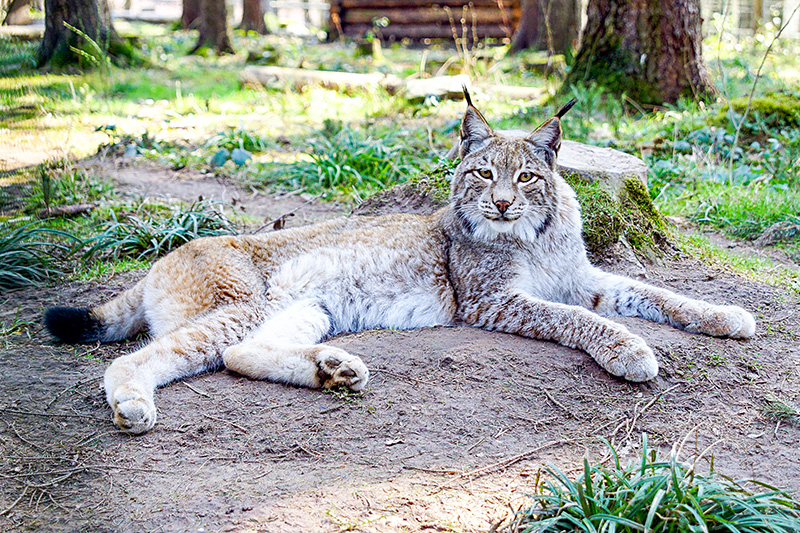 In the Eifelpark, the wonderful animal park in Rhineland-Palatinate, currently six lynx live in a large enclosure with numerous retreats. From nearby, you can watch the beautiful animals and see their climbing skills. The youngest animals are now two years old and were born in the Eifelpark. The lynx also feature in the animal feeding at 2.30pm in the wildlife park.

Lynx are predators and, just like lions, tigers, and domestic cats, belong to the family of cat species. They are the largest wild cats existing in Europe. A lynx grows to about 80-110 cm long, 55-65 cm high and weighs between 20-22 kg. The word “lynx” comes from the Greek meaning light, shine, sparkle – this is a reference to the lynx’s sparkling eyes.

Appearance
The males are slightly larger than the females, but both look the same. Their beige to reddish-brown, dark spotted coat is so dense that even the worst of the winter cold cannot touch them. Thanks to their colouring, they are perfectly camouflaged in the dense forest between the trees. The stomach and throat are more brightly coloured. A lynx can be easily recognised by the about four inches long “brushes” on its ears and the short stubby tail with its black tip.

Habitat
Lynx love forests and are loners. There, they are so well camouflaged with their spotted coat between the leaves and branches that they are rarely seen. Only very far in the north does the lynx wander through the forest-free tundra.

Nutrition
The lynx is a stealth hunter and takes its prey by surprise; it often watches its prey from a tree and then attacks the animals from above. The lynx eats rabbits, mice, deer, fish, mountain goats and antelopes. Lynx need about one deer per week for sustenance.

Close enough to touch – feeding wolves, bears and lynxes
No family should miss the animal feedings at the adventure park – they are an absolute highlight! When it is time for the feeding-rounds, the Eifelpark visitors accompany the animal keepers to the enclosures of various predators and can observe this fascinating spectacle. There they learn a lot about the behaviour of the animals to be fed. There is also the opportunity to personally ask the animal keeper some questions. The animals have to playfully ‘earn’ their meals and so you can closely watch the food intake and also the social behaviour of the animals – this is an unforgettable experience at the family park in the Eifel.