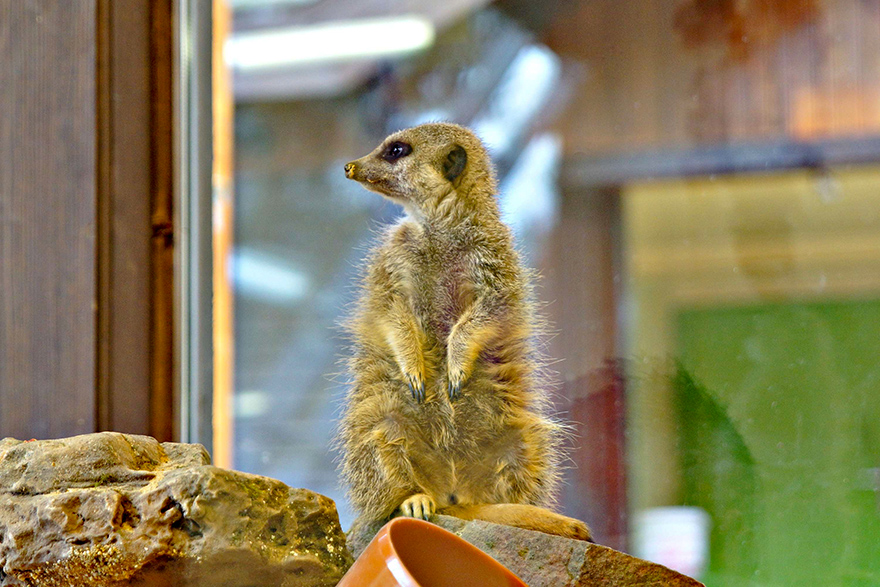 Since the 2014 season, three meerkats have been living in the Eifelpark Gondorf. They are a real highlight! You can stand for hours in front of their enclosure in the animal house on the Purzelgasse and just enjoy watching these cute animals playing around – they are one of our visitors’ favourite animals.

Appearance
Meerkats are small carnivorans which belong to the mongoose family. Their bodies are long and slender. They grow to a height of 25 to 35 centimetres, the tail measures 24 centimetres and, on average, they weigh about 800 grams. Their fur is grey-brown to white-grey, whilst the undercoat has a slightly reddish hue.

Typically, they have eight to ten dark, almost black, horizontal stripes running down their backs. The head is pale, and the snout is elongated. The eyes are surrounded by a black ring and the small ears and tail are dark in colour. They have four toes each on both their front and back feet. The claws on the forepaws are very strong, so that the animals can dig well. Meerkats have a highly developed sense of smell and can see very well, too.

Habitat
Meerkats can only be found in southern Africa. There, they can be found in South Africa, Namibia, southern Angola and Botswana. Meerkats colonise vast plains in savannahs and rocky drylands and semi-deserts where there are few shrubs and trees – they inhabit crevices or dig up to three-metre-deep burrows there. Meerkats avoid forests and mountainous areas.